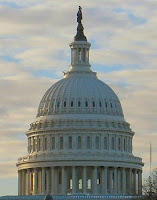 I need an intervention to counter my addiction to news coverage. Between watching the stock market bounce up and down and keeping up with the action on the over-spending bill, I am saturated with news. Yesterday, I even tuned in to C-Span while the super bill was being debated. It was like watching a sports event where the teams are totally unmatched; you know who is going to win; but you keep hoping you are wrong. My team lost yesterday - and so did our country. Hopefully, some sanity will prevail when the bill goes to the Senate. The more details I hear about the specific spending detains in the House bill, the angrier I become. The only people for whom this is a stimulus bill are those in the special interests groups who are being paid back. I will keep watching Fox News and C-Span as the bill goes to the Senate. Let's all hope that the final version is a Stimulus Bill rather than a Spending Bill.
Posted by Cathy at 6:15 PM