Hapeville: Hometown of Jeff Foxworthy, Chick-fil-A, and me!

When I was growing up the name of my town was often mis-heard by strangers. Did you say hateville, they would ask? No, it’s Hapeville, named after the Hape family. It was, and still is, a friendly small town tucked up against the Atlanta city limits

It was a mostly middle-class community, with our parents working at the air lines, which were just becoming a big industry, at the local Ford assembly plant, and at small businesses or larger businesses in the city (Atlanta).

Our town wasn’t a perfect place to live; but it was a great place to call home. Church was a big part of our lives; we had a tiny branch of the Atlanta library; a town swimming pool; parks, and a recreation center. We received a solid education; we learned manners and morals and citizenship. We played outside without fear; and ate dinner as a family. In the Hapeville of my youth we enjoyed a sense of community; of belonging; of knowing personally our classmates and our neighbors.
Comedian Jeff Foxworthy wasn’t in my class; he is a bit younger. Recently, however, while my Hapeville classmate and friend Kathy Bradford Garrett was visiting me, we went to the Six Flags for its 40th Anniversary. Jeff Foxworthy was on stage for this special celebration. Kathy and I had our picture taken with him after the show and told him we, too, were graduates of HHS. He was very down-to-earth and seemed to appreciate meeting fellow Hapeville grads. I must give a disclaimer as I refer to Foxworthy and Hapeville. He has become a success defining being a redneck. I know he couldn’t have learned this from his classmates or neighbors at HHS.

For an upcoming class reunion, our other local celebrity plays a role. We will dine on Chick-fil-A. The Dwarf House is one of those places of which every Hapeville person has special memories. If you have to ask, “what is the Dwarf House” you didn’t grow up in Hapeville. It was at this small eatery that Truett Cathy created his now famous Chick-fil-A recipe. Back then, the Dwarf House was just a wonderful family-owned gathering place with good food and friendly people. It’s the place we have to return to whenever we are anywhere near the Southside of town.

Hapeville, in many ways, is no longer the same community of my youth. The high school has become an elementary school; and the high school is now a consolidated one in a neighboring town; Eastern Air Lines, where my father worked, is no longer in existence; and the airport has moved to Clayton County. The Ford Plant has closed and there are rumors that the land will become a planned development.


Few of my classmates still live in the town anymore; many have moved to Fayette County or Henry or, like me, to Cobb. We are spread out throughout the country; but wherever we go, what ever become as adults, we are all the better from growing up in a small town called Hapeville.
Posted by Cathy at 3:43 PM No comments:

HONORING OUR SON PETER ON HIS FIRST FATHER’S DAY 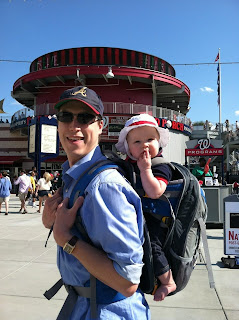 I have a photo in front of me, of our son, Peter, wearing a backpack filled with his happy little daughter at her first baseball game. They are in front of the Nationals Stadium in D.C., Peter wearing his Atlanta Braves hat. Lilly has on a Braves shirt, covered by a Nationals bib. (Her mom, Ann-Bailey, is a Nationals fan). We have other similar photos of the two of them, Peter with the special baby backpack with Lilly on a family hike in the Virginia mountains; Peter with Lilly in a smaller pack at the Woodruff Arts Center, viewing the art.
It is so heartwarming to watch our grown-up son interacting with his baby daughter. Lilly Bell is only nine months old, but she has already spent some amazing quality time with her dad (and mom).
This will be Peter’s first Father’s Day as a Dad. He comes from a long line of loving, caring, interactive fathers. He has had a great role model in his own father and fatherhood seems to come naturally to him. Each male must find his own style of parenting, but he is guided by the fathers who have been a part of his life.
What does it take to be a great father? Love certainly must be the first ingredient. Without that, there is no foundation for the role. Although I’m sure it must happens, I can’t imagine a father, who, upon meeting his child, does not feel a bond, a kinship, and a deep swelling of love. The other fatherly traits build on this instinctual love. Kindness, patience, nurture: all of these are important components of fatherhood. It’s also important to give discipline and instruction, offered with love. Conversations are also important; not one way monologues, but speaking and listening. Already Peter and Lilly Bell have conversations, although her vocabulary is somewhat limited at the moment. But he talks to her, reads to her, and listens proudly to her babbling, excited by sounds that are becoming actual words.
I have a lot of pictures in my mind from Peter’s youth: Allan helping him build a racer for the Scouts Pinewood Derby; the two of them cutting the grass, as Peter followed his dad with his toy mower; the two of them going on a Scout camping trip; and Allan watching Peter in a play or a soccer match. There has always been time set aside for interaction; time for being together, sometimes as a whole family, sometimes just father and son or daughter.
Just as Peter and his sister, Katie, were blessed with a wonderful dad Lilly is blessed to have Peter as her caring, loving dad.
Posted by Cathy at 10:57 PM No comments: 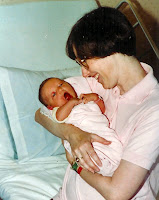 Mary Catherine and I discuss her future, sitting together in her nursery. We discuss the facts of life of being female – how in her future perhaps people will give females more credit for the work they do. How, when she is helping run a business like her mommy does, that people will not give all the credit to the males.
Yes, there really is a special bond between a mother and daughter. Just like there is a special bond between mother and son. Nothing can take away the special relationship between Peter and me. But another dimension has opened in my life.
Whereas Peter looks to his Daddy to learn how to act as a man, Mary Catherine will look to me to learn how to act as a woman. It is an awesome responsibility being a role model. It’s almost as frightening as it is exciting and challenging. Already, I see Peter imitating his father in the way he stands and the phrases he chooses.
Standing in the kitchen the other day, watching the two of them together in the back yard, I saw how eager Peter is to do what his dad does. As Allan scooped things up in his shovel and tossed them over the fence, Peter, a few paces behind, scooped things up in his little shovel and tried hard to toss them over the fence as well.
Like father; like son; like mother; like daughter. Our little imitators are watching and so the challenge is ours, to be the best person we can, not perfect, but as good as we can be.
It might be easier on a mother having two sons, but I think it will be more exciting and challenging having both a son and a daughter. Mary Catherine and I have only had a week together but the bond is already formed. The other mothers were right – a daughter is very special indeed.
Posted by Cathy at 12:07 PM No comments: